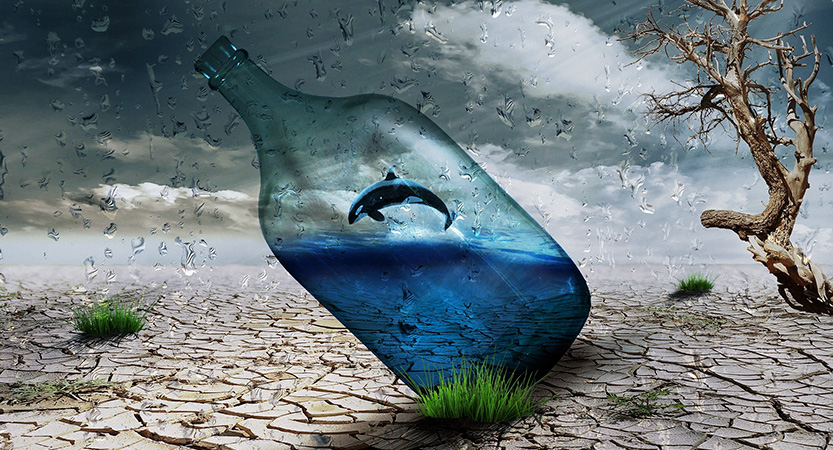 Next the traveler looks at the wind in the atmosphere and sees that the air is employed wisely and generously in such numerous tasks that it is as if each of the inanimate atoms of that unconscious air were hearing and noting the orders coming from that monarch of the universe; without neglecting a single one of them, it performs them in ordered fashion and through the power of the monarch. Thereby it gives breath to all beings and conveys to all living things the heat, light, and electricity they need, and transmits sound, as well as aiding in the pollination of plants.

The traveler then looks at the rain and sees that within those delicate, glistening sweet drops, sent from a hidden treasure of mercy, there are so many compassionate gifts and functions contained that it is as if mercy itself were assuming shape and flowing forth from the dominical treasury in the form of drops. It is for this reason that rain has been called “mercy.” Next, the traveler looks at the lightning and listens to the thunder, and sees that both of these, too, are employed in wondrous tasks.

Then taking his eyes off these, he looks to his own intellect and says: “The inanimate, lifeless cloud that resembles carded cotton has, of course, no knowledge of us; when it comes to our aid, it is not because it takes pity on us. It cannot appear and disappear without receiving orders.

Rather it acts in accordance with the orders of a most powerful and compassionate commander. First, it disappears without leaving a trace, then suddenly reappears in order to begin its work. By the command and power of a most active and exalted, a most magnificent and splendid, monarch, it fills and then empties the atmosphere. Inscribing the sky with wisdom and erasing the pattern, it makes of the sky a tablet of effacement and affirmation, a depiction of the gathering and the resurrection.

By the contriving of a most generous and bountiful, a most munificent and solicitous sustainer, a ruler who regulates and disposes, it mounts the wind and taking with it treasuries of rain each as heavy as a mountain, hastens to the aid of the needy. It is as if it were weeping over them in pity, with its tears causing the flowers to smile, tempering the heat of the sun, spraying gardens with water, and washing and cleansing the face of the earth.”

That wondering traveler then tells his own intellect: “These hundreds of thousands of wise, merciful and ingenious tasks and acts of generosity and mercy that arise from the veil and outer form of this inanimate, lifeless, unconscious, volatile, unstable, stormy, unsettled, and inconstant air, clearly establish that this diligent wind, this tireless servant, never acts of itself, but rather in accordance with the orders of a most powerful and knowing, a wisest and generous commander. It is as if each particle were aware of every single task, like a soldier understanding and hearkening to every order of its commander, for it hears and obeys every dominical command that courses through the air.

It aids all animals to breathe and to live, all plants to pollinate and grow and cultivates all the matter necessary for their survival. It directs and administers the clouds, makes possible the voyaging of sailing ships, and enables sounds to be conveyed, particularly by means of wireless, telephone, telegraph, and radio, as well as numerous other universal functions.

“Now these atoms, each composed of two such simple materials as hydrogen and oxygen and each resembling the other, exist in hundreds of thousands of different fashions all over the globe; I conclude therefore that they are being employed and set to work in the utmost orderliness by a hand of wisdom.

“As the verse makes clear,

READ:  if you're feeling lonely

And the disposition of the winds and the clouds, held in disciplined order between the heavens and the earth,

the one who through the disposition of the winds employs them in countless dominical functions, who through the ordering of the clouds uses them in infinite tasks of mercy, and who creates the air in this fashion — such a one can only be the Possessor of Necessary Existence, the One Empowered over All Things and Knowledgeable of All Things, the Sustainer endowed with Glory and Generosity.” This is the conclusion our traveler now draws.

Then he looks at the rain and sees that within it are contained benefits as numerous as the raindrops, and dominical manifestations as multiple as the particles of rain, and instances of wisdom as plentiful as its atoms. Those sweet, delicate, and blessed drops are moreover created in so beautiful and ordered a fashion, that particularly the rain sent in the summertime, is dispatched and caused to fall with such balance and regularity that not even stormy winds that cause large objects to collide can destroy its equilibrium and order; the drops do not collide with each other or merge in such fashion as to become harmful masses of water.

Water, composed of two simple elements like hydrogen and oxygen, is employed in hundreds of thousands of otherwise, purposeful tasks and arts, particularly inanimate beings; although it is itself inanimate and unconscious. The rain which is then the very embodiment of divine mercy can only be manufactured in the unseen treasury of mercy of One Most Compassionate and Merciful, and on its descent expounds in physical form the verse:

And He it is who sends down the rain after men have despaired and thus spreads out His Mercy.

The traveler next listens to the thunder and watches the lightning. He understands that these two wondrous events in the atmosphere are like a material demonstration of the verse,

The thunder glorifies His praise,  The brilliance of His lightning almost robs them of their sight.

They also announce the coming of rain and thus give glad tidings to the needy.

Yes, this sudden utterance of a miraculous sound by the atmosphere; the filling of the dark sky with the flash and fire of lightning; the setting alight of the clouds that resemble mountains of cotton or pipes bursting with water and snow — these and similar phenomena are like a blow struck on the head of the negligent man whose gaze is directed down at the earth. They tell him:

“Lift up your head, look at the miraculous deeds of the most active and powerful being who wishes to make himself known. In the same way that you are not left to your own devices, so too, these phenomena and events have a master and a purpose. Each of them is caused to fulfill a particular task, and each is employed by a Most Wise Disposer.”

The wondering traveler hears then the lofty and manifest testimony to the truth that is composed of the disposition of the winds, the descent of the rains, and the administration of the events of the atmosphere, and says: “I believe in God.” That which was stated in the Second Degree of the First Station expresses the observations of the traveler concerning the atmosphere:

There is no god but God, the Necessary Being, to whose necessary existence in unity the atmosphere and all its contains testifies, through the testimony of the sublimity of the comprehensiveness of the truth of subjugation, disposal, causing to descend, and regulation, a truth vast and perfect, and to be observed.

Laugh in Misfortune’s Face; It too will Laugh